skip to main | skip to sidebar

In the end, all the fear mongering and hatred didn’t matter.
In the end, the lies were proven to be untrue.
In the end, we wanted to be one people, the United States of America.

We believed.
and that’s what mattered
in the end.


I feel this is appropriate today:

Not so funny games

Last night we watched this movie, which is by far the most fucked up, most disturbing movie I have seen in quite some time.

I am not going to go into great detail about it, mostly because when I woke up at 5:30 this morning I couldn’t get back to sleep because I couldn’t stop thinking about the movie. However, the two demented guys both looked very familiar, and upon looking at their Wikipedia pages I now know that I recognize one of them for being on Dawson’s Creek for awhile, and that I have never seen the other one except in this twisted, twisted movie.

It was a little slow in places and about there were about thirty minutes’ worth of scenes toward the end that could have been condensed into about five or ten minutes to help speed things along, but the movie was well-made, and terrifying – I was in suspense from the minute the movie started, right up until the end. I am also basically terrified of all strangers now, so thank you, Michael Haneke, for writing this. How do you come up with this stuff, anyway? From now on, I am only watching movies that have rainbows and cotton candy and happiness in them.
Posted by H at 5:56 PM 5 comments:

To the lady driving in front of me at approximately 4:35 p.m.:

This afternoon, while attempting to merge onto southbound Highway 100 from Excelsior Boulevard, you ever-so-kindly would not move your ass, but with traffic whizzing past me at 70 miles per hour I was unable to get around you. This almost caused a series of accidents which I was fortunately able to avoid, but believe it or not, narrowly avoiding your own death does not do much to improve one's already shitty mood.

You were seemingly oblivious to the what was going on, and when I was finally able to get around you I saw the reason for this: the book you were reading was far more interesting than paying attention to your surroundings, which happened to be rapidly moving, extremely heavy pieces of metal that had the potential to turn your little green Grand Am (traveling at a rate of approximately 40 miles per hour) into your casket.

I'm sorry that I screamed the F bomb in your general direction many times, and that I called you a "dumb f-ing c-word." It was just a c-word kind of day, and also, that's what you are if you choose to put lives in danger by reading a book while traveling down the road.

There is a song from Sesame Street called "Put Down the Ducky." Today, I vote that they change the lyrics to "Put Down the Booky (and Pay Attention to the Road)."

Wow, this ol’ blog is getting a little dusty! I didn’t realize it had been so long, and apparently nothing (good, bad or otherwise) has happened since September 3rd (the day I saw Rage Against the Machine). To summarize the past month, I have been:

Working. I hate my job, but what are you going to do? In this shitty economy, I’m happy to have a job. The healthcare organization at which I am employed sent out an e‑mail to employees last week saying things here are in tip-top shape, so this must mean that people are going to be getting laid off soon. But for now, I am gainfully employed, so I can at least be thankful for that.

Watching TV. I realize this makes me sound like a sloth, but goodness, I love fall TV season. The Office has been perfection so far and so has Family Guy, which are really the only two TV shows currently airing that I make any effort to watch, so maybe I haven’t been spending as much time in front of the boob tube as previously thought. Of course, with it being October, there’s baseball to be watched (I’m rooting for a Dodgers-Red Sox Series, with the Red Sox to win it all) and I have to cheer on the Hawkeyes, even when we can’t convert from 4th-and-1 and blow what should have been a very winnable game against Michigan State. (I will not comment on the previous week’s loss to Northwestern, since I didn’t actually see the game.)

Doing my civic duty and registering to vote. I filled out the form, printed it off and mailed it a few weeks ago, so when I received an envelope from the Minnesota Secretary of State I naturally believed it would be my voter registration card. Wrong-o. Turns out I had filled in the current date in the date of birth field. You may be thinking, ‘H, you shouldn’t even be allowed to vote, dumbass!’ In my defense, the field read: “Date of Birth (NOT TODAY’S DATE).” This is confusing. I fixed my error and mailed it off again yesterday, and am keeping my fingers crossed that something else ridiculous didn’t happen. Like, I’m thinking about it now and am slightly panicked that What if I didn’t actually fix it? I have to stop thinking about this now or I am going to lose my mind.

Other random things I am thinking of right now:

A woman from work to whom I only occasionally talk to on the phone and whom I have never met called me “honey” on the phone this morning. This freaks me out. I do not like being called “honey” “sweetie” or anything along those lines by anyone other than my boyfriend or family members.

I stopped watching Project Runway after the third episode but got suckered into a mini-marathon last weekend, where I caught last week’s episode – the last before the designers went off to create collections for fashion week – and discovered that Kenley is a scary, crazy bitch and the other three designers still annoyed the crap out of me. A friend caught me up to speed with this week’s episode so I will likely pump her for details after the finale so I don’t have to watch it myself.

There are two conservative radio hosts here in the Twin Cities who have been kicking around the idea that Magic Johnson has been faking AIDS. These douchebags should be shot. 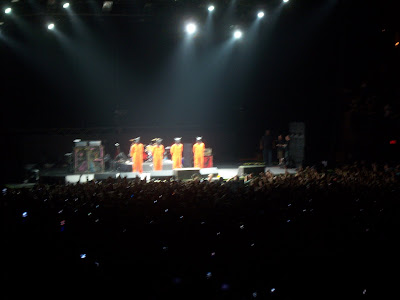 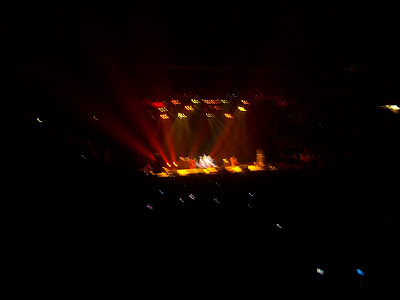 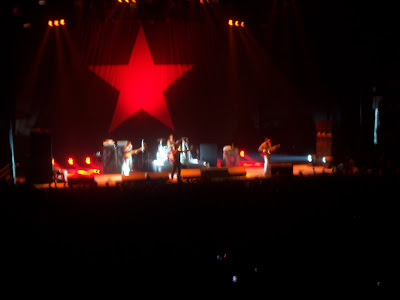 Tom Morello is a god 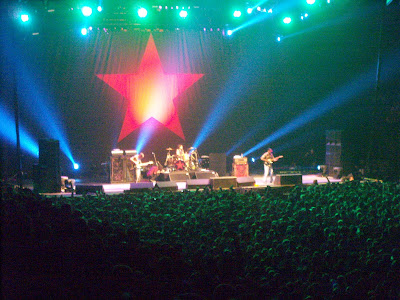 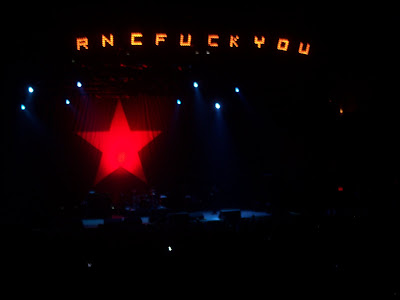 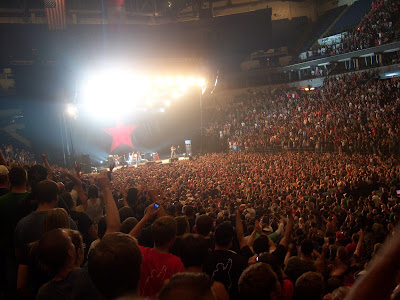 Rage Against the Machine

Words? There are none.

But I'll try to find some anyway.

The atmosphere inside - and outside - the Target Center last night was incredible. Riding the light rail downtown, it seemed (except for the huge, permanent grin on my face and random squeals of excitement) like any other night.

Getting off the light rail at the Nicollet Mall station was normal, as was walking down the mall. People sipping beers on bar patios, savoring the year's last moments of patio drinking weather; people in suits, shouting into cell phones; people walking, ear buds securely in place. Walking up Sixth Street after a quick dinner at Chipotle, there were the first clues that it was not business as usual. People with red badges hanging from their necks. "Welcome Wisconsin Delegation!" read a huge banner at the Marriott.

And then, at Sixth Street and First Avenue. The crowd of people waiting to enter the Target Center was no different from any other event evening. The hordes of police officers? A bit out of the ordinary.

Not just cops - these were cops in full-on riot gear. Gas masks. Jumpsuits. Three-foot wooden poles - not your average nightstick.

The opening act was Anti-Flag, a band hailing from Pittsburgh. Though I couldn't understand a lot of what I was hearing, I'm pretty sure I agreed with most of it. The overriding theme was: Fuck the war. Definitely not a statement I disagree with.

Between Anti-Flag and Rage, the arena really started to fill up and people in the lower level began their quest to jump down onto the floor, with varying degrees of success. One guy got caught by security but managed to pull away and got lost in the crowd. One guy got caught by security and taken down to the floor. One guy jumped down, ran past security and then, once safely in the throngs of people on the floor, took his yellow shirt off, revealing a black shirt he had on underneath. Clever. And it wasn't the first costume change we'd see.

Rage Against the Machine finally came out wearing Guantanamo jumpsuits and hoods. A strong statement, and a powerful one. As the crew handed equipment to them (or in the case of drummer Brad Wilk, led him to his drums) they proceeded to play "Bombtrack" while still wearing the hoods.

The show was intense from start to finish, going from one song to the next with little or no talking. Aside from "We're Rage Against the Machine, from Los Angeles" after the opening song - as if they needed an introduction - Zack didn't speak again until just before the final song of the main set, "Wake Up."

Setlist:
Bombtrack
Testify
Bulls On Parade
People Of The Sun
Know Your Enemy
Bullet In The Head
Katrina song
Born Of A Broken Man
Guerrilla Radio
Ashes In The Fall
Calm Like A Bomb
Sleep Now In The Fire
Wake Up

Zack encouraged everyone to show more discipline than the cops, who were "just looking for shit." As we filed out of the arena and onto the concourse, people were still screaming. But once outside the Target center, with hundreds of officers ready for riot, it was eerily quiet.

Hands down, without a doubt, the best concert I've ever seen. It was everything I expected it to be, everything I hoped it would be, and much, much more.

Will there be better shows in the future? It's possible. But this one's going to be damn hard to top.
Posted by H at 6:58 PM 3 comments:

Every Monday should be a holiday. So should every Tuesday, Wednesday, Thursday and Friday. That would leave...no days for work. I think I could learn to deal with that.

If Tom Morello was playing a show on Harriet Island tonight (performing as the Nightwatchman, a show I, sadly, did not attend) and Rage doesn't play until Wednesday, doesn't that mean he'll just be hanging out for the next couple days? Doesn't that mean there's a chance I could run into him at, like, Target or Subway or something? I'm just saying. My odds of randomly meeting Tom Morello are way better this week than they have ever been or probably will ever be.

I finally got around to watching Casino Royale tonight - holy awesome. I'm a big James Bond fan (thanks Dad!) and had my doubts about Daniel Craig as 007, but I was more than pleasantly surprised and can't wait for Quantum of Solace.

Rage Against the Machine this Wednesday at the Target Center. There are no words to describe my excitement.
Posted by H at 10:09 PM 3 comments: